Search for new sources of CP violation via the measurement of the neutron electric dipole moment (nEDM).

As shown in the figure below, the existence of a nonzero electric dipole moment for the neutron - as for any non-degenerate particle - implies the breaking of two discrete symmetries: the parity P and the time reversal T. In accordance to the CPT theorem, the latter is equivalent to a violation of the combined symmetry CP, C being the charge conjugation operation. This simple observation has deep consequences, connecting cosmology and particle physics. In an attempt to understand the origin of the disappearance of antimatter in the Universe, known as BAU (Baryon Asymmetry of the Universe), Sakharov has indeed shown that three conditions are necessary, one of them being the existence of CP symmetry breaking mechanisms. In the standard model of particle physics (SM), a single source of CP breaking (the δ phase of the CKM matrix) exists, but its intensity is too low to explain the BAU. In contrast, the SM extensions generically predict the existence of new phases hence new sources of CP violation.

The current limit on the EDM of the neutron is 3 x 10-26e cm, i.e. 5 to 6 orders of magnitude above the SM prediction. The observation of a nonzero signal at 10-28-10-27e cm, goal of the next generation of experiments, would be the sign of a new physics and probably a decisive progress in our understanding of the disappearance of antimatter. On the contrary, pushing down the limit in the 10-28e cm range, would make the electroweak baryogenesis scenario, where the BAU is created at the electroweak transition, highly unlikely.

where μn and dnare the magnetic and electric dipole moments of the neutron and h is the Planck's constant. The difference provides a direct access to the neutron EDM:

To measure the precession frequency of the neutron, we use the Ramsey's technique of separated oscillatory fields, invented in 1951 for the first measurement. The main experimental challenge is to control the temporal stability of the magnetic fied (dB/B ~ 10-7 over 100 s) and to optimize its homogeneity over a large volume (dB/B ~ 10-5 in a 20 l volume). Current experiments use ultracold neutrons (UCN) whose long storage times allow to maximize the measurement sensitivity.

The source of the Paul Scherrer Institute in Switzerland is a spallation source based on the high intensity proton beam (590 MeV, current > 2 mA) and a solid deuterium converter to generate ultracold neutrons. 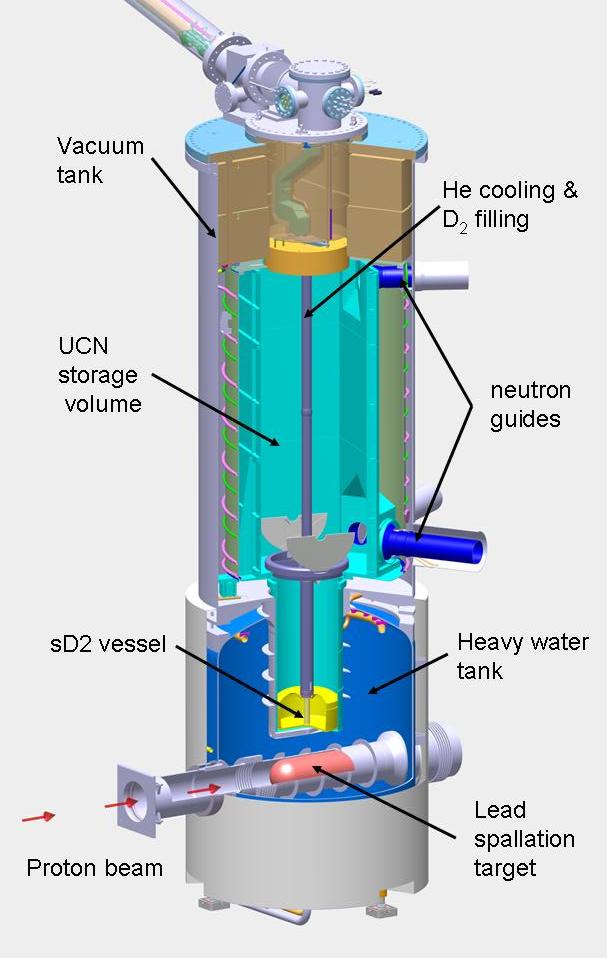 The following figure shows the main components of the source. The neutrons are produced by spallation by steering the entire proton beam (power > 1.2 MW) on a lead source with a duty cycle of 1 % (typically 4 s every 400 s) to limit the heating of the deuterium. The neutrons are then thermalized in a 3.5 m3 pool of heavy water surrounding the deuterium and then transformed in cold neutron in the solid deuterium crystal, within a volume of 30 l maintained at a temperature close to 5 K. Some of these neutrons can then be converted into ultracold neutrons by interacting with the crystal (phonon generation mechanism) and then be guided to the storage volume through a 1.2 m high chimney, sitting just above the SD2 volume. The storage volume has two guides that can provide UCNs to two experimental areas, one of which is occupied by the nEDM experiment and the other one is used for tests.

The commissioning of the source took place in 2010 and 2011. The source now works with a good reliability but the UCN density obtained so far remains below the expected values.

The experiment at PSI

We are currently using the spectrometer developed in the 90s by the RAL-Sussex-ILL collaboration, which holds the best limit on the neutron EDM, published in 2006. This device, moved from the ILL to PSI in 2009, operates to room temperature. The figure below shows the precession chamber, of a volume of 20 l and located in the center of the vacuum chamber. It consists of a hollow cylinder made of polystyrene (PS) and two disk-shaped electrodes. 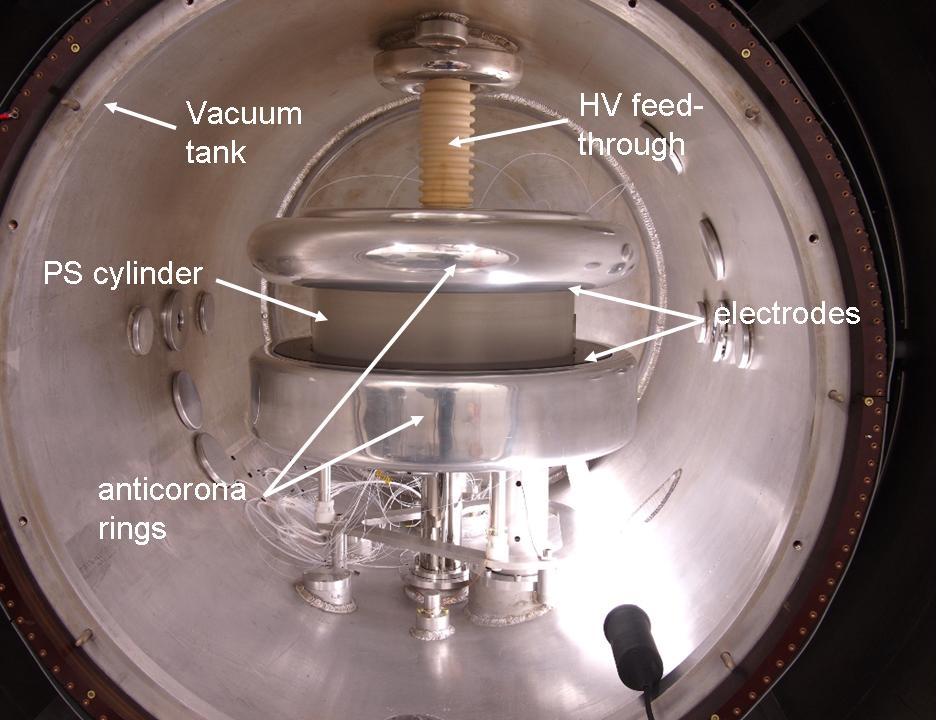 With this device and based on the current performance of the UCN source, we expect to approach a limit of 10-26 e cm by 2016.

Our collaboration works since a few years on the design of a new spectrometer, the n2EDM project. This apparatus will use the same operating principle as the existing one, namely a detector at room temperature combining a Hg co-magnetometer to external magnetometers (Cs and in addition 3He), and will be optimized for the PSI UCN source. 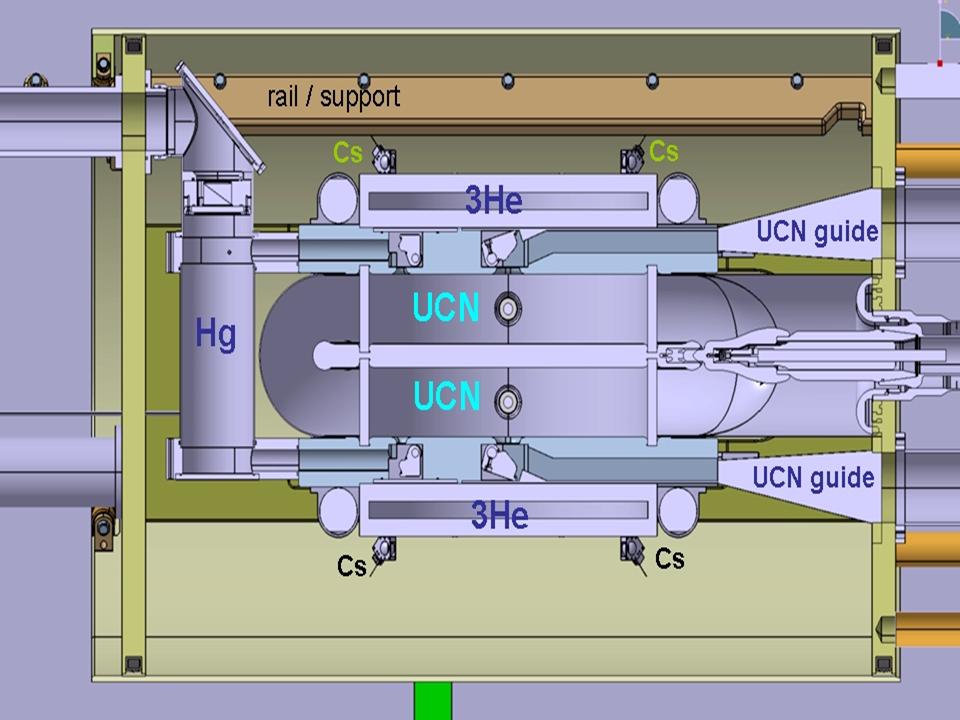 One of the main improvements will be to use a double precession chamber; a preliminary layout is displayed on the figure. Such a scheme will allow a simultaneous measurement of both (parallel/antiparallel) configurations, and thus greatly reduce systematic errors related to the magnetic field. Our efforts were so far focused on the magnetic shielding whose performances directly impact the achievable limit and which represents by far the most expensive part of the apparatus. The delivery of this shielding at PSI is expected by the end of 2015 and the availability of the new spectrometer is planned for 2018.
Considering that the UCN density will remain at the present level, a limit close to 10-27 e cm should be reached after 5 years of data taking, around 2023.