Welcome on the page of the Auger team

The  activities of the research group are focussed on the detection and the study of Ultra High Energy Cosmic Rays,

mainly by  collaborating to the Pierre Auger Observatory.

News of the LPSC Auger Team 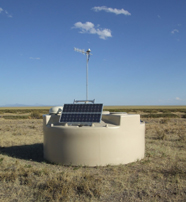 The Pierre Auger Observatory which is run by an international collaboration of 19 countries is devoted to the study of the hightest energy cosmic rays (E > 1018 eV). An array of detectors covering an area 3000 km² has been installed in the Argentinean Pampa near the city of Malargüe (province of Mendoza).

The observatory is the world largest cosmic ray detector.

The LPSC group has joined the Pierre Auger Collaboration in 2006.

We are currently involved in technical tasks which are necessary for a smooth running of the observatory (online monitoring of the surface detector) and for the ongoing R&D’s (data acquisition control for the AERA array [1] ; mechanical studies for the RDA array [2] ; upgrades of the Observatory). Analysis wise, we are involved in the search for ultra high energy neutrinos in the observatory data as well as the study of hadronic interactions at extreme energies. Using our recent knowledge on radio-detection of extensive air showers, our group participates to the EASIER [3] project, actively developing antennas and analysing the data. We are also committed to R&D efforts aiming at future UHECR observatories.