ECOCLIM, the LPSC cooling system based on free cooling

The LPSC computing room uses dual mode free cooling: For 85% of the time when the external temperature is less than 25°C direct air free cooling can be used and for the remain time water-air free cooling is used.

The principle of direct air free cooling is quite simple: to cool the production servers and storage when the external temperature is lower than 25°C, which is about 85% of the time at Grenoble, air is drawn from outside and is used directly to cool the servers.
The air coming out on the rear side of the servers is then blown back to the outside.
There is a complete separation of hot and cold air flow which is the principle of cold corridor systems.
When the outside temperature is too cold, in our case lower than 13°C, to avoid sending icy air over the servers a recycle valve injects some of the hot air from the rear of the cabinets mixing it with outside air to regulate the input temperature to a set point of 13°C.

Water–air free cooling: when the outside temperature is above 25°C the air is still taken outside to cool the servers but it is first cooled down to 25°C by a simple water-air exchanger. Cold water is pumped from groundwater. Note this is direct water Download the complete reference here. to air exchange without a compressor. 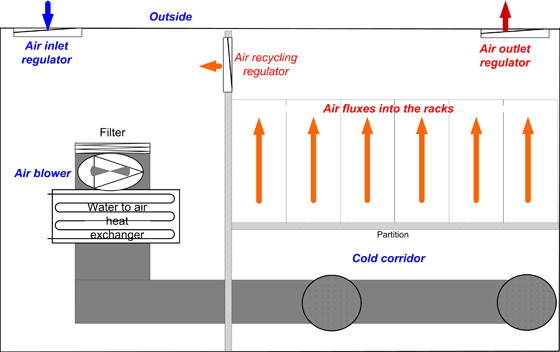 No stop of the production due to the cooling
Since March 2008 we experienced NO INTERRUPTION of the production linked with the cooling system.
At the beginning of the project because of a delay in the availability of the water – air exchanger and the blowing system we did operate, during two winter months (March and April), without it! This proved that servers were able to draw air from outside only with their own fanning capacities!
Summer 2010 during building work on the site the water inlet pipe was cut by an excavator. The outside temperature was 25°C and, thanks to direct air free cooling, production was able to continue while the pipe was repaired.
- A problem with the cooling has no impact on the production if temperature is below 25°C: 85% of the time.
- Such a problem will have a small impact 13% of the time where the temperature is between 25°C and 33°C because computer can operate up to 33°C without damage.

Free cooling allows saving more than 90% of the energy which is necessary to cool the room compared to conventional means.
Here are the measured values at LPSC:
- The server and storage electrical consumption is currently 60 kW
- The fan power is 2 kW for an air flow of 16 000 m3/h
- The maximum fan power is 3kW for a maximum air flow of 23 000 m3/h
- When the water to air exchanger is used it can use a maximum water flow of 20m3/h. At LPSC water is pumped for the use of several experiments, not only for the cooling of the computing. We estimate that the pumping cost when we are using the water-air exchanger is below 3kW.

Cooling cost is only 4% of the total electrical consumption!