ADS have the particularity of being "subcritical" reactors, i.e. there is no self-sustaining chain reaction and therefore the thermal power can only be maintained with an external supply of neutrons. In most of the concepts studied, an accelerator provides high-energy protons, which strike a spallation target made of a heavy metal (e.g. lead) located at the center of the subcritical reactor. The neutrons thus created by spallation in large numbers will create fissions in the core and make it possible to generate and maintain a certain thermal power that can be modulated or switched to zero on request by driving the accelerator. This control of the power by the accelerator makes it possible to use exotic fuels such as minor actinides, whose neutronic properties do not allow their use in large quantities in a critical reactor (essentially because of their small fraction of delayed neutrons and its impact on the reactor's control kinetics). The ADS incinerator is then operated in a fast version, with liquid lead as coolant. Such ADSs could find their place in a scenario where one wishes to incinerate, in dedicated systems, certain nuclear waste, more particularly minor actinides, produced by current PWR systems (so-called double stratum scenarios) or in the event of nuclear phase out: the objective would be to reduce their radiotoxicity and their residual heat and consequently the storage surfaces, which represents a major stake in waste management strategies, particularly for deep geological storage.

The potential of these systems has led to numerous international research programs to lift the various locks on the way to their feasibility, leading to a project to build a 100 MW intermediate power demonstrator at SCK-CEN (Belgium), the MYRRHA project.

Among the many experimental programs devoted to the various aspects of ADS, we have been involved since the 1990s in those dedicated to neutronics in the subcritical medium and more particularly to the crucial question of measuring the level of subcriticality of the reactor (or "reactivity"). This level must remain within safety margins that guarantee that the system will remain sufficiently far from criticality in the event of an incident (for example, during an accidental insertion of reactivity) so that the control of its power remains assured by the accelerator. It is therefore necessary to have a reliable absolute measurement of the level of subcriticality to ensure that the system remains within the margins defined beforehand. However, in normal operating mode, no direct measurement in the reactor gives access to the core reactivity, which is an overall physical parameter characterizing a core. It is therefore crucial to investigate neutronics and measurement methods dedicated to this type of core in order to do so reliably and rapidly. To do this, an experimental approach in a mock-up is essential. A zero power mock-up allows the study of the kinetics of the core independently of the thermal aspects.

The LPSC team and its collaborators at LPC Caen participated in the experimental program GUINEVERE from 2006 to 2020 (EUROTRANS, FREYA, MYRTE and MYRACL projects). This program followed on from the LPSC's work on the MUSE program (1998-2005), carried out at the MASURCA facility at CEA Cadarache, on whose conclusions it was built. It pursues the overall objective of validating a methodology for online monitoring of a future power system during its operation. It is also interested in characterizing the reactivity of the core in its final loading phase, i.e. from a fairly low level of reactivity to the chosen one. To do this, configurations as close as possible to the features expected for a power ADS have been studied.

From 2006 to 2010, within the framework of the European project EUROTRANS-IP, the GUINEVERE "project" mainly consisted in the realization of an experimental installation of mock-up type to have a tool adapted to the experimental needs. This model was built from the VENUS reactor of the SCK-CEN at Mol in Belgium. This research reactor, initially thermal, was modified for the GUINEVERE project in order to get as close as possible to the core of a fast lead-based ADS. The new core consists of a network of fuel pins of 30% enriched metallic uranium mixed with solid lead rodlets (CEA loan), and it is surrounded by lead reflectors. Four fuel assemblies are removed in its center to allow insertion of the terminal part of the beam line providing the neutron source (tritiated target), thus ensuring vertical coupling. This is a 14 MeV neutron source of the GENEPI type (T(d,n) reactions at 220 keV), the GENEPI-3C source, built by an IN2P3 collaboration and adapted to the new requirements of the experimental program. In addition to the initial intense pulsed mode, the GENEPI-3C source also operates in continuous mode (160 μA - 1 mA) in which fast, brief and recurrent beam interruptions can be programmed to regularly record the spectra of the time decay of the neutron population thus induced in the core. It is from these spectra that the methods used to determine the reactivity of the system are applied. This facility, which now bears the name GUINEVERE, was inaugurated in 2010 and can operate in coupled subcritical mode since October 2011. As the source is removable, the reactor can also be loaded in critical configuration if necessary. 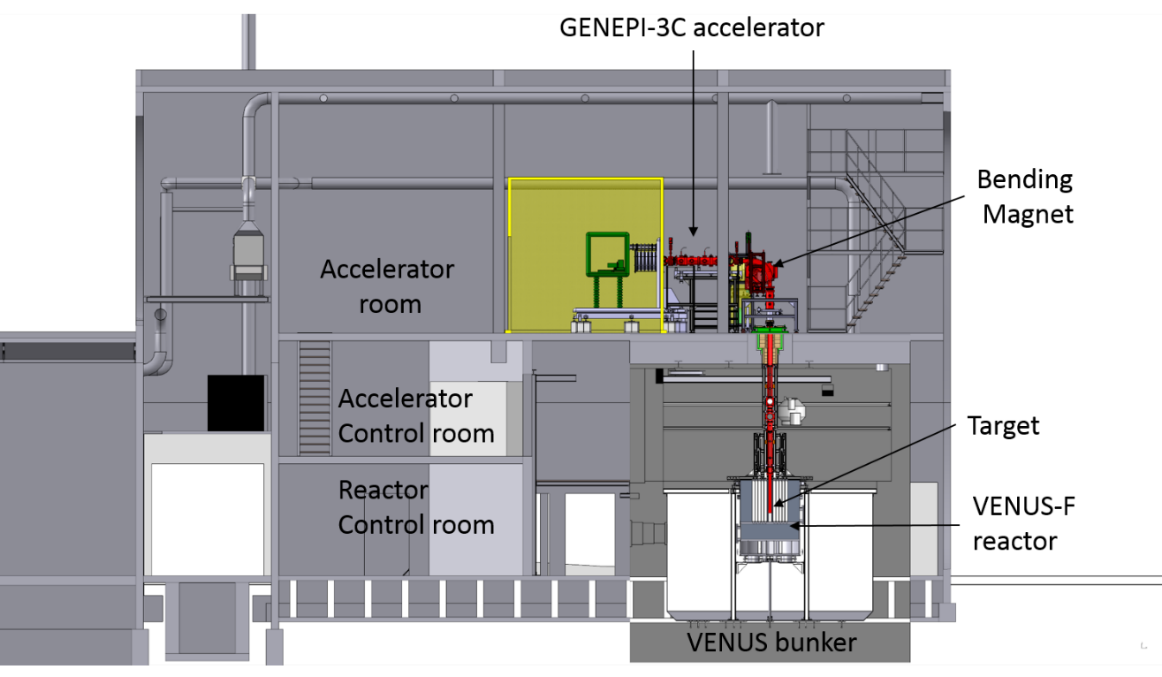 Diagram of the GUINEVERE experimental facility (VENUS reactor coupled to the GENEPI-3C accelerator, on the SCK-CEN site at Mol). (Credits SCK-CNRS)

The "GUINEVERE" experimental program focuses on methodologies to monitor the online the reactivity of an ADS. It has been carried out mainly in three phases, the European projects FREYA and MYRTE (led by the SCK-CEN), and the Franco-Belgian project MYRACL, which have in turn pushed the investigations into core and beam configurations increasingly representative of the ADS project MYRRHA, thus consolidating the steps necessary for its future licensing.

During the European FREYA project "Fast Reactor Experiments for hYbrid Applications" (FP7 2011-2016), the studies focused initially on subcritical cores made up of enriched uranium and lead that are fairly homogeneous and symmetrical, in a reactivity range from -$18 to -$4 (multiplication factors ranging from 0.9 to 0.97) obtained by adjusting the number of fuel assemblies at the periphery of the core, or by playing on the control rods. Different measurement techniques could be applied using either pulsed beams or continuous beams with interruptions, allowing in both cases to apply methods exploiting the temporal dynamics of the neutron population to extract reactivity. More exotic configurations were then realized in order to test the robustness of the methods according to the composition of the core: the position of the source was modified, part of the lead reflector was replaced by stainless steel, an assembly simulating an irradiation cell was installed. After this first approach, more concentrated fuel assemblies including alumina were used to soften the neutron energy spectrum (closer to that of MYRRHA), and to obtain smaller cores allowing to test new elements in the reflector, such as new irradiation cells or the presence of graphite to simulate the beryllium oxide one foreseen in MYRRHA. The same reactivity measurement methods could be tested on these cores. Very good agreements were obtained between the reactivities of these cores determined by a reference method (MSM method) and the measurements carried out durin beam interruptions using U5 fission chambers after correction for space-energy effects.

The design of the core for the MYRRHA project has undergone constant evolution in parallel with the experimental programs, leading to the definition of new experimental configurations to test the reliability of reactivity measurements under more representative conditions. Thus part (WP5) of the European project MYRTE (MYRRHA Research and Transmutation Endeavour, H2020, 2016-2019) has allowed us to deepen our studies by replacing part of the initial lead in the core assemblies with bismuth in order to simulate the presence of the Pb-Bi eutectic expected in MYRRHA, by adding a double graphite ring between the fuel zone and the reflector, with the possibility of also installing several irradiation cells in the core. In addition to these new features, these experiments focused particularly on the instrumentation dedicated to reactivity measurements: the nature of the fission chamber deposits and their location, with the constraint of being able to carry out reliable measurements in the reflector. In addition to the U5 fission chambers of different sensitivities used in previous campaigns, U8 fission chambers (therefore threshold fission chambers) with different degrees of purity have been added, and also the possibility of shielding the U5 chambers with boron covers to promote the detection of fast neutrons. Many detector locations could be tested, and the measurements were concentrated on the continuous mode interrupted periodically. Spatial effects were again demonstrated, all the more important as the subcriticality is high, but computable by Monte Carlo code, and finally leading to quite reliable reactivity values, showing the possibility to monitor the reactivity in the reflector with such detectors.

A final aspect of reactivity measurements required a dedicated project: this is the case of the starting-up of a power ADS, characterized by two aspects: at starting-up the reactor will be deep subcritical, and the power injected by the linear accelerator coupled to the core will not be at its nominal level but only a few percent. It is the purpose of the MYRACL (MYRRHA ACceLerator) project, a collaboration between IN2P3 and SCK-CEN (2017-2021), to try to reproduce this type of measurement conditions on the GUINEVERE mock-up to demonstrate the feasibility of monitoring. From the last core studied in MYRTE, made deep subcritical by playing on the insertion of the safety rods (from -21$ to -7$), reactivity measurements were performed by operating the GENEPI-3C accelerator in interrupted continuous mode but with a very low duty cycle, typically 2% (2 ms of beam over a period of 100 ms). These measurements could also be repeated in an even more subcritical core with a few less fuel assemblies (-30$) in order to take into account the difference in delayed neutron fraction between the VENUS-F and MYRRHA cores (due to the difference in fuel composition) and to represent a fairly subcritical level of MYRRHA. Depending on the location of the detectors (and their nature), in particular on their proximity to core heterogeneities, the raw results are quite scattered for the same core, all the more so as the core is more subcritical. This dispersion is nevertheless reduced to 2% by applying the calculated spatial-energy factors, leading to a good agreement with the reference MSM values.