Approximately 85% of the mass contents of the universe is in the form of dark matter, which could be composed of new particles. The search for such particles, which could eventually be produced in the proton-proton collisions at the LHC, is underway with the ATLAS detector. These searches have so far mostly focused on supersymmetric particles, whose decay chains contain dark matter candidates (for ex. the neutralinos), and on the direct production of dark matter particles in so-called "simplified" models by looking for mono-X final states (where X=jet, photon, W/Z/H boson – see Figure 1).

The LPSC group has mainly participated in supersymmetry searches in Run-1 [1,3] and in simplified model searches [a,b,c,d,e] afterwards, especially by contributing to the mono-photon channel searches [2,4,5] and to the combination of the various search channels [6] (see Figure 1). 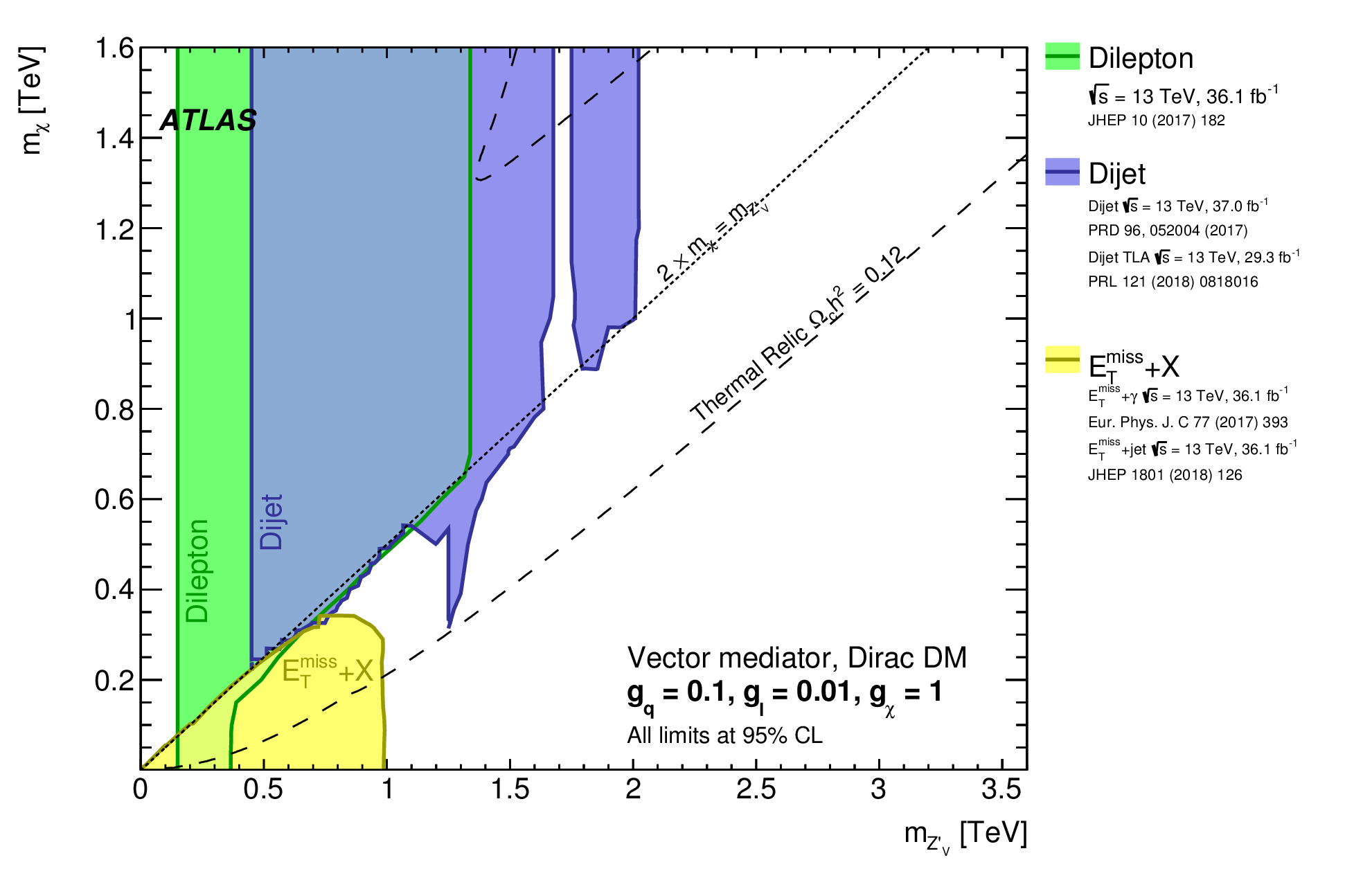 With the start of Run-3 in 2022, it will be possible to strenghten the limits provided by these types of searches [f], but the discovery space beyond the already existing limits will be reduced. It is therefore important to cover less explored scenarios which require a very good understanding of the objects in the detector, understanding which can now benefit from many years of data taking. One of these scenarios is the existence of a 'hidden' or 'dark' sector (including a dark matter candidate) which can be evinced by the presence of jets with unusual characteristics of their associated inner detector tracks and/or of their calorimeter energy deposition pattern, as these jets come from the decay of dark-sector particles which can have long lifetimes. The focus of the group is now on these types of searches.

Prospectives for the next few years

The group has hence started to focus on the search for jets from the dark sector with the ATLAS detector, in the context of dark matter searches. The work first focuses on the searches with the full Run-2 dataset and on the definition of benchmarks through the Snowmass2021 exercise.

If these do not reveal any sign of new physics, the work will then focus on identifying possible weaknesses in the parameter space coverage in order to prepare the Run-3 searches. This will necessarily include work on the peculiar jet performances (general jet performances, displaced vertices associated to atypical calorimeter energy deposition, possibility of new triggers,...), which will necessitate validation in the first Run-3 data.

Publications within the ATLAS collaboration (searches in the context of simpified models or supersymmetry):

Other publications linked to dark matter searches at the LHC: