For this experiment, the department participated in the integration of the optical modules of the detector as well as in the activities of tests and checks of the matrix consisted of 1600 photomultipliers (PM).

This integration consisted in the assembly of the focal plan which consists of 25 modules containing each 4 sub-modules. Every sub-module is equipped with 16 photomultipliers. The PM was beforehand coupled according to their sizes and to their gain and their implementation (equipment) was made according to this information.

A seal between the printed circuit and the PM base was set up for "potting", insulating PM electrodes at high voltage. It eliminates low-pressure strains. At low voltage, the more air pressure decreases and the more electric shock rises. The curve of Paschen, representing strain voltage as a function of inter-electrodes distance and pressure, has a minimal value called Paschen minimum. 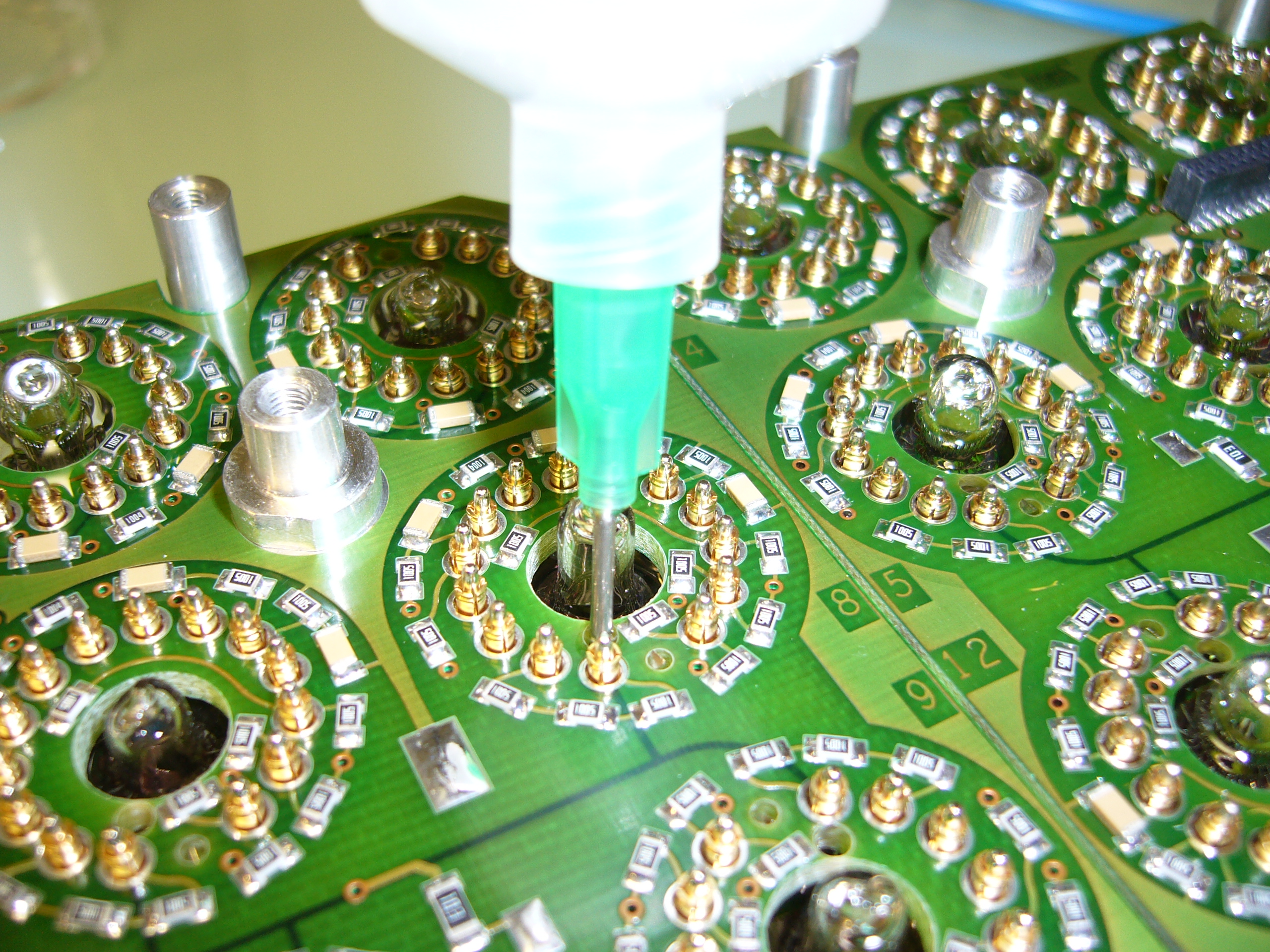 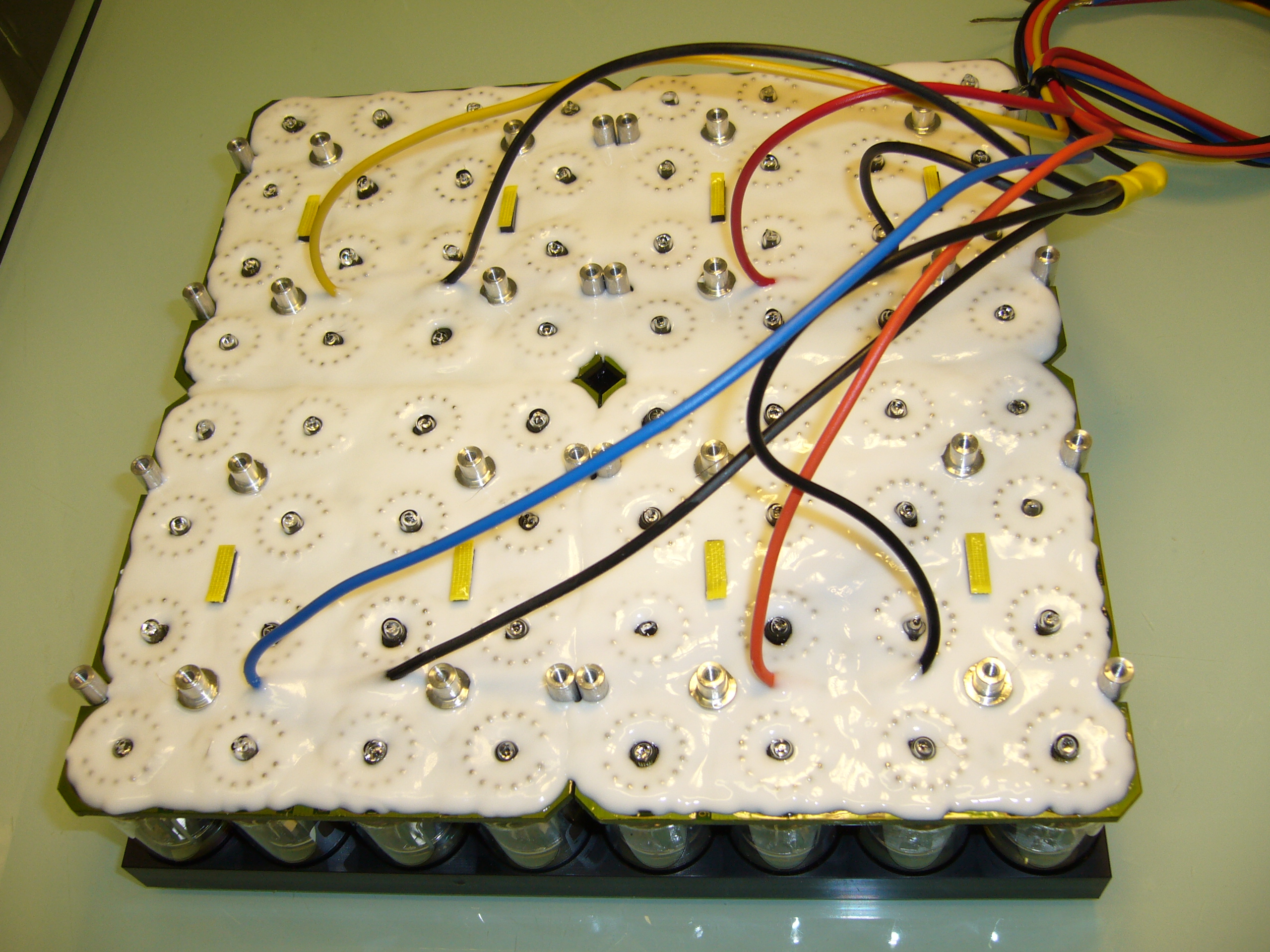 "Potting" was made by injecting a resin of type Mapsil 213 B, 13 grams of product were used by sub-module and 18 minutes on average are necessary for every injection, polymerization being made at ambient temperature.

An operation of "coating" was then made for the same reasons as previously (Paschen). It consists in soaking every sub-module, at the level of the printed circuit and on every component, with a resin (Nusil CV1152), applied to the brush, which insures a protection of surface. This activity required the putting in steam room of sub-modules for 6 hours in 40 ° C.

Finally, the third operation was also realized to avoid the strains. This one corresponds to the addition of a layer of micro balloons (micro glass balls) mixed in the resin (Mapsil 213 B), and applied by syringe on the reverse of sub-module. Tests of every sub-module at high-voltage and vacuum were then led to verify that there were no strains in the passage of Paschen minimum. 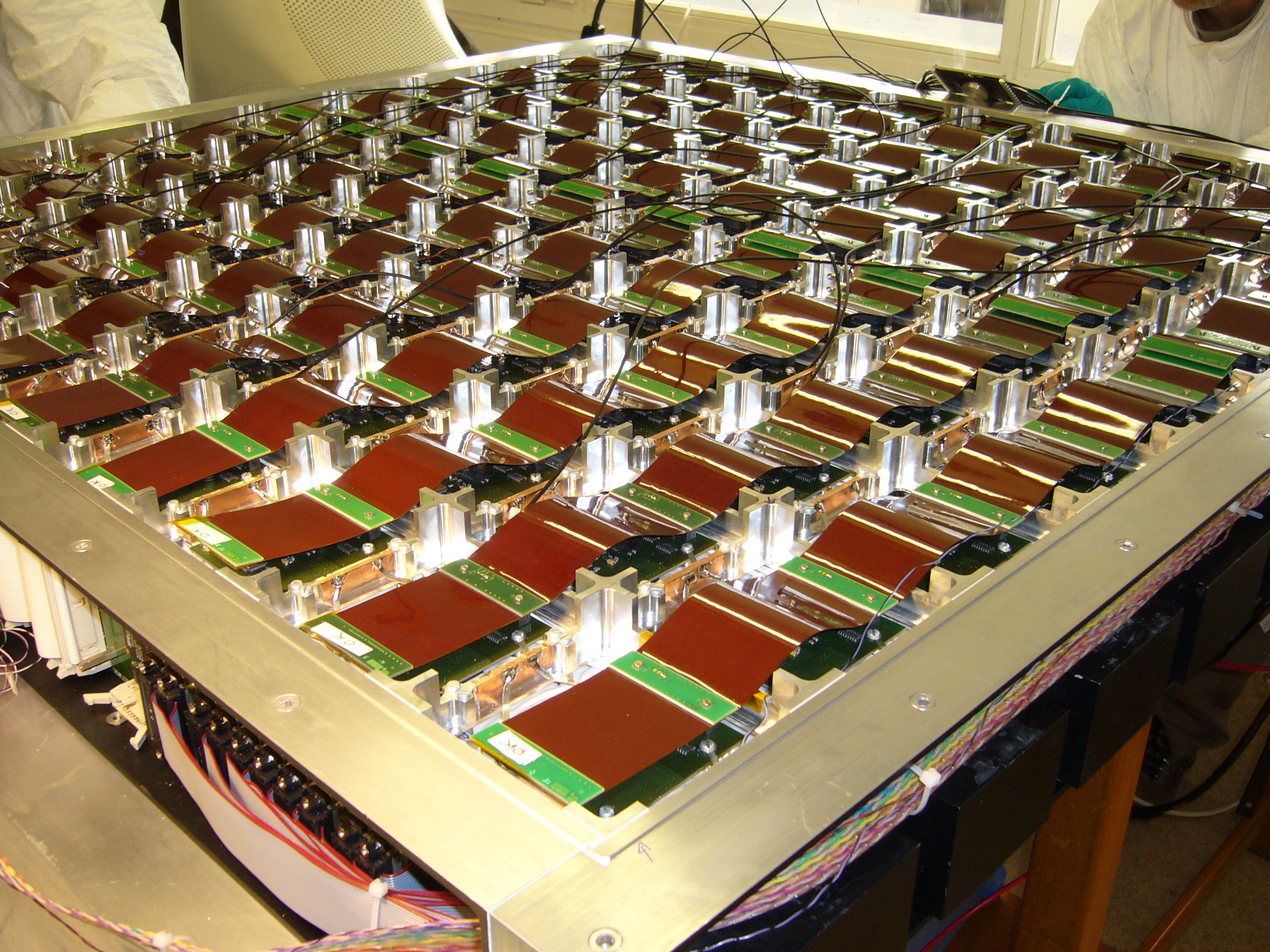 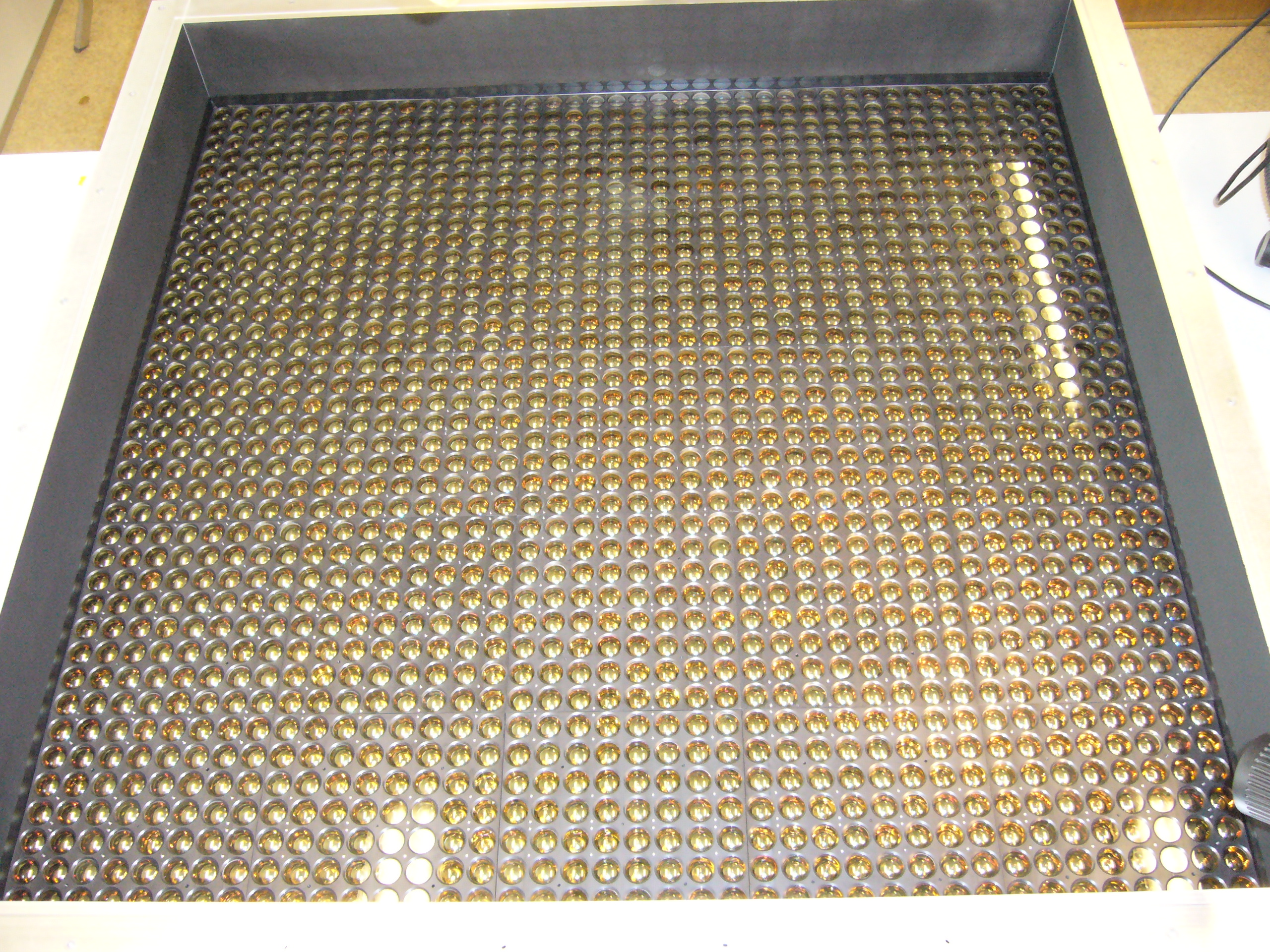 To finish, having equipped the focal plan of probes of temperature, circuits of connection of type " Flex " and supplies, the plan of tiles of aérogel is installed. It is constituted of two sheets of Mylar tense and stuck on an aluminum frame containing the tiles of aérogel. Two mechanical protections of nest of bee type are then installed on the front and on the back of the device.

All these operations required not far from 12 working months, from January, 2006 till January, 2007.

After Planck satellite control system prototype 20K cryo-generator (Sorption Coolers Electronic, SCE) tests successes in 2003, the manufacturing of the qualification and flight models were confided to EADS-CRISA (space industry), in Spain, at the beginning of 2004.

The delivery of the first qualification model (EQM) during the curse of 2004 permitted to realize the coupled tests with the flight cryo-generator at the end of the year, again on JPL's site, NASA  laboratory at Pasadena, USA.

The department was responsible here for the organization of these tests as well as the software development of the tools of piloting and tests, developed under LabVIEW. The realization of the it test first ones with the flight cryo-generator, led in close collaboration with the electronics department of the laboratory, were, even there, successful and allowed the development of the embedeed software for which the laboratory is responsible.

The second qualification model ( CQM), identical in all to the future flight models but built with not spatial qualified components, was delivered to us at the beginning of year 2005. The department organized the second campaign of test at the JPL in spring, 2005, always coupled with the flight cryo-generator, just before its delivery in Europe. This last campaign in the USA allowed to test several specific procedures recently implemented in the embedeed software, among which the procedures of automatic covering of functioning error, necessary for enhanced reliability of the system during flight.

During the beginning of the first half of the year 2006, EADS-CRISA delivered three flight models of the electronic case SCE, two models which will be integrated on the satellite (FM1 and FM2) and an extra model (PFM). The SDI was responsible for the implementation and the execution of the functional tests on these cases, according to the current spatial quality plan, in the ESA standards.

These tests took place at the LPSC in clean room, until June, 2006, date in which the electronics FM1 and FM2 was delivered to the satellite's manufacturer (Thales Alenia Space in Cannes) for integration.

In parallel to these functional tests, a campaign of cryogenic validation tests took place in spring 2006, implementing both flight Sorption Coolers integrated on the Planck satellite's qualification model, in association with the SCE qualification model case (CQM) that had been tested and delivered by the end of 2005. These tests took place over several weeks at the Liege Space Center (CSL - Belgium). It allowed to validate part of the cryogenic aspects of the Sorption Cooler and of its control electronics housing.

At the end of the year on 2006, the qualification SCE housing was re-qualified in avionic housing (AVM) to be a part of avionic tests on a satellite's model. These tests, which focus essentially on the electric aspects of the satellite service module interface took place on several days, at Thales Alenia Space (Torino, Italy).

Finally, at the beginning of year 2007, again avionic tests took place, but this time by piloting the electronic housing from "Operating Center Mission" of the ESA (MOC), located in Darmstadt in Germany.

The SDI completely organized and widely participated in all these tests, both in the LPSC and on sites.

In 2008, the satellite is transferred on the Ariane Space's launch site at Kourou in Guiana. And even there, the SDI participates in the cryogenic tests and of pre-launch of the satellite.

After the satellite's launch, again, the department took an important part in the post-launch operations of Mission Operating Center (MOC) of the ESA, at Darmstadt in Germany. 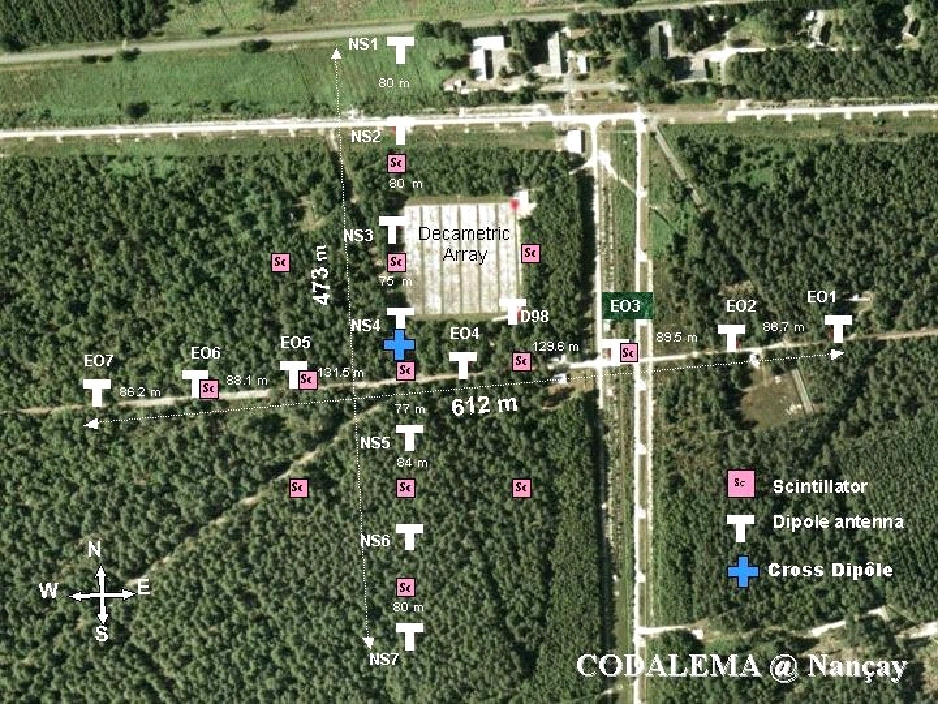