The STEREO experiment just released its first physics results at the last “Rencontres de Moriond” conference[1]. A significant part of the most likely parameter space for a hypothetical 4th neutrino is now excluded.

Neutrinos are notoriously hard-to-detect elementary particles. They are produced in the core of stars, at particle accelerators, in very high energy phenomena or – as in STEREO – in nuclear reactor cores. Neutrinos do not carry any electric charge and only rarely do they interact with matter. Nowadays, we know of three types: electron neutrinos, muon neutrinos and tau neutrinos. The 20-year old astonishing discovery that neutrinos change type while travelling was awarded the 2015 Nobel Prize.

Are there more than 3 neutrinos? This question was revived in 2011, when researchers noticed that two so far unexplained experimental results could be reconciled if a 4th neutrino existed[2] . With a mass of about 1 eV, this hypothetical particle known as “sterile” neutrino would be heavier than the 3 known neutrino types. Several experiments were designed, among which STEREO, to test the existence of this hypothetical 4th neutrino, and are currently under way.

STEREO is a French-German experiment designed for this goal, measuring very precisely the rates and energy profiles of the neutrinos generated by the nuclear reactor of the Institut Laue-Langevin (ILL) in Grenoble, France. The experiment was devised and is being operated by a team of scientists from Irfu-CEA in Saclay, the Institut Laue-Langevin in Grenoble, the Annecy’s Particle Physics Laboratory (LAPP), the Grenoble’s Subatomic Physics and Cosmology Laboratory (LPSC) and the Max-Planck-Institut für Kernphysik in Heidelberg, Germany (MPIK).

The first results of the STEREO experiment presented at the Moriond conference exclude a significant part of the most likely parameter space expected for a hypothetical 4th neutrino (see Figure below). A 4 times larger data sample expected by the end of 2019 will help to further clarify the case together with other expected results from complementary projects. Thanks to the highly enriched uranium fuel in the ILL core, STEREO will also provide a new benchmark for the neutrino spectrum produced by the fission of 235U, of utmost importance for many other reactor neutrino experiments. 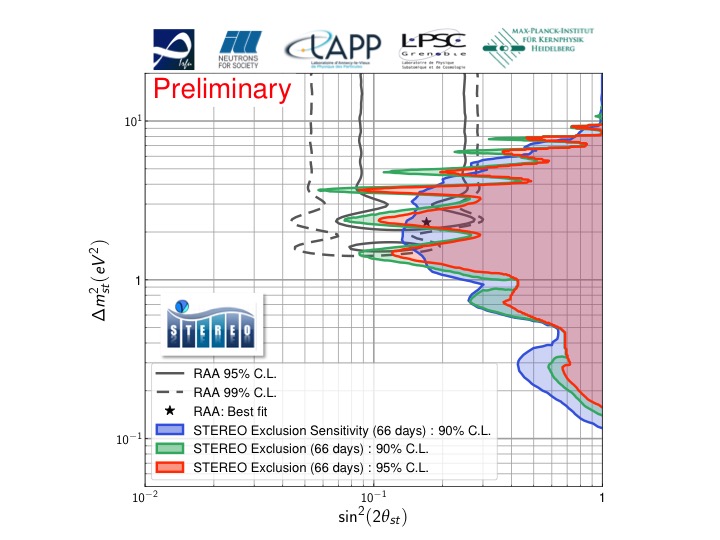 Figure: The plot shows the possible values of the 4th neutrino parameters, and the values which are now excluded by STEREO. The vertical axis is related to the new neutrino’s mass and oscillation frequency, whereas the horizontal axis corresponds to its oscillation amplitude. The black lines represent the values favoured by previous experimental hints, the star being the most likely point. The green and red areas have now been rejected with 90 and 95% certainty, respectively, as they are incompatible with STEREO’s data. The blue area represents the ideal rejection expected from the available statistical precision.