In 2014, the second meeting of the group had been organized in the LPSC at the instigation of Rémi Faure and of Olivier Zimmermann.

This summer, the dynamism of the LUGE group won him the "most active Francophone LabVIEW User Group" trophy at the "NI Week" in Austin, from July 31st till August 4th, 2016. 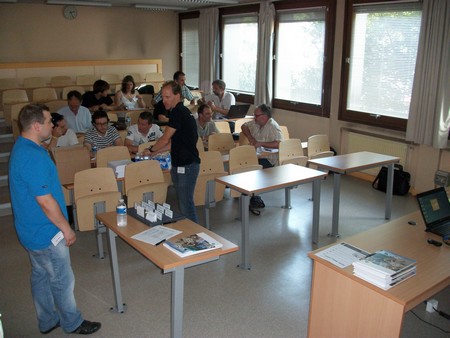 For several years, french and worldwide LabVIEW users were formed in « LabVIEW User Groups » to promote technical exchanges for this programming software. Funded in 2013, LUGE (LabVIEW User Grenoble Exchange) includes developers from Rhône-Alpes of any levels and professional circles. For CNRS staff, it permit knowledge exchange and contacts with compagnies which use LabVIEW in a different context.

With this trophy, LUGE is knowned at international level for the quality and interest of meetings organised. Presentations were take back several times for other conferences and technical meetings.

A special thanks from the LUGE group goes to LPSC wich contributed to its success with the meeting at LPSC in 2014.