The CVD single crystal diamonds are produced either industrially or in a laboratory (example:  the LSPM Villetaneuse). The figure below shows some diamond samples tested at the LPSC. The crystal size is about 5x5 mm2 and a width of about 500 μm; colored spots allow us to identify the sides of the diamonds. 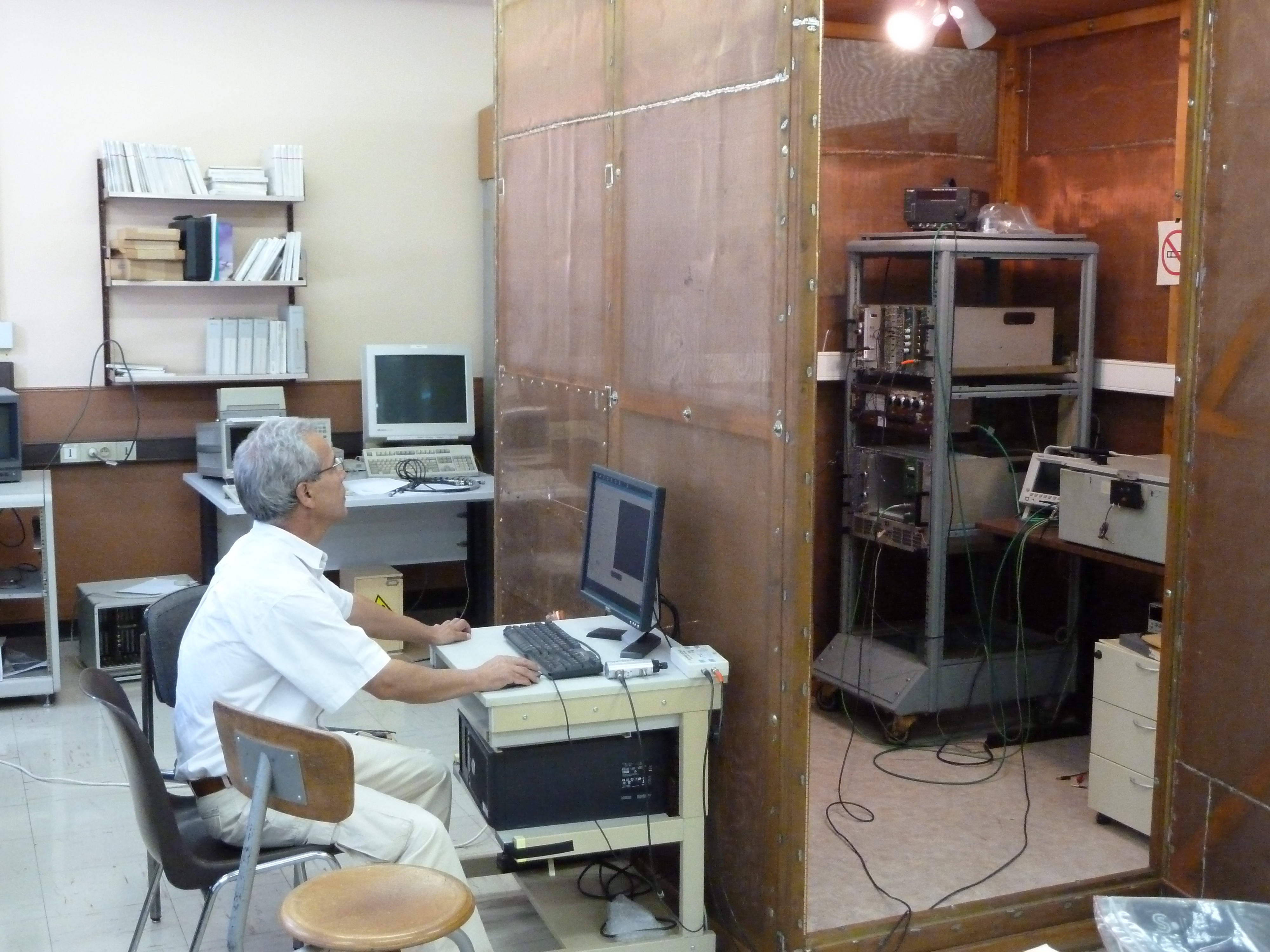 A low noise test bench was built at LPSC. This test bed uses a source of strontium 90 beta emitting particles passthrough the diamond sample by ionizing the environnement  ( creation of electron-hole pairs). By  using an electric fiel, ionization charge is collected and then used to study the properties and performances of the sample. The schematic of the test bench can be found in the figure below. 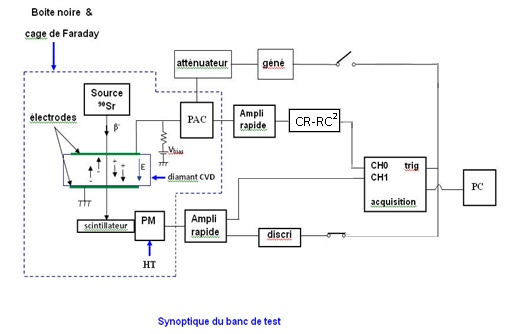 A scintillator is coupled to a photomultiplier to trigger the acquisition system. The charge of ionization read by the preamplifier (PAC) is then amplified again and shaped to improve the signal/noise before it reaches the acquisition system. A pulse generator is used to calibrate the electronic unit. The figure below shows, for example, the signal amplitude according to the charge injected. 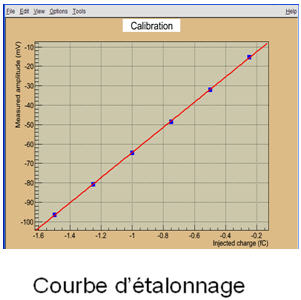 The data acquisition is performed by the USB WAVE CATCHER card. (Documentation of this card in the web can be found at: http://electronique.lal.in2p3.fr/echanges/USBWaveCatcher/). The data file are then sent to a PC and analyzed using the ROOT CERN sotware.

The signal,that is to say the charge read by the electronics, is highly dependent on the quality of the sample (number of dislocations, surface statesn vacancy defects, interstital,etc.) and the voltage polarization applied to the crystal. It is customary to express the charge collection distance (CDD) as:

Q0/µm which is the average ionization produced by a particle in Minimum ionisation (PID) through à 1 µm diamond load.

The figure below shows the results of some measurements made on the sample LPSC Diamond noted E6-DDL-M2. Note that the charge collection distance depends on the electrical bias applied to the diamond.
This asymmetry is most likely due to the production process of diamonds obtained from one or more germs on one of the two sides of the crystal. The existence of residual charges trapped in the crystal is indubitable because when the bias voltage is cut, signals reverse polarity, and slowly decrrease in amplitude over time. The mode called "load" is to calculate the integral of the signal whereas the "amplitude" mode is to measure the maximum amplitude of the signal. 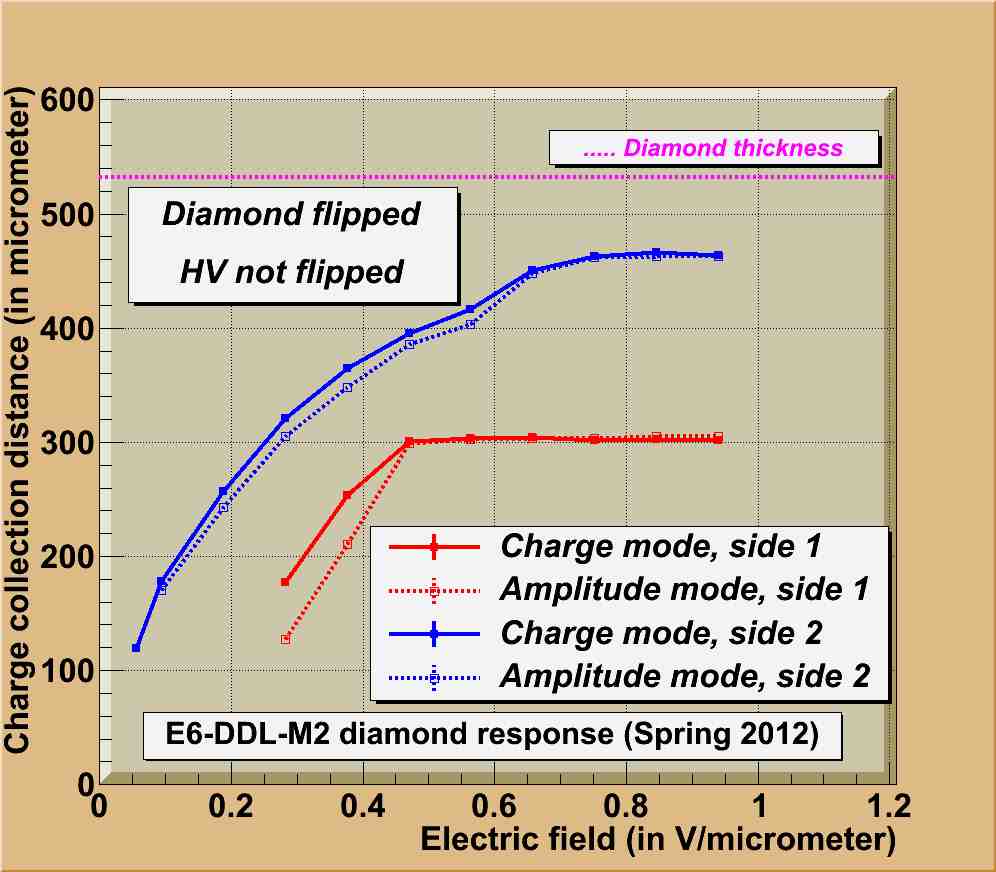 Stability over time was tested on the LPSC diamond sample SO-0366 (538 µm thick) for a bias voltage of 350 V. A rapid decrease in th response of the diamond (30%) was observed during the first hour. Then there was a slower decrease of about 1% per day for about a week followed by a rise (probaly sharp) before the amplitude is stabized (see figure below) 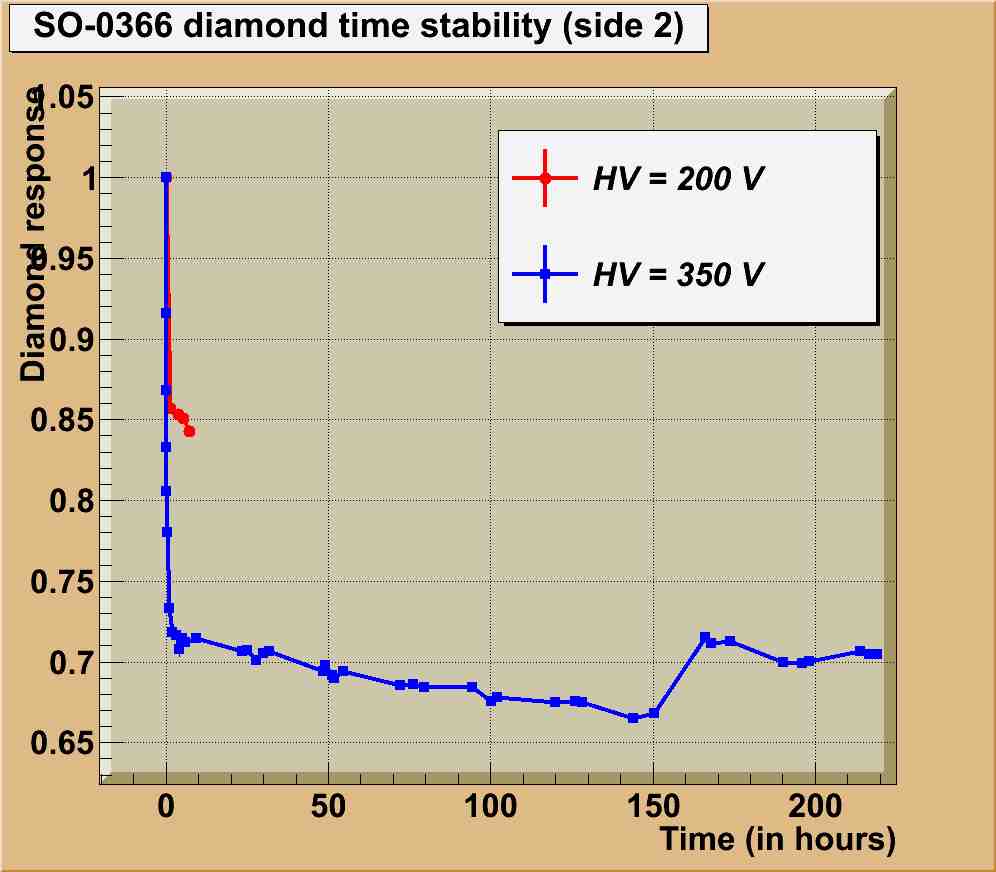