The low energy beam line transfer (LEBT) of SPIRAL2 has been designed by GANIL, CEA/IRFU and IPNO.

The LEBT has been assembled at LPSC, under the lead of LPSC and IPNL, between mid-2008 and mid-2009. The LEBT assembly was the first opportunity of the project partners to come and validate the accelerator components in real conditions : mechanics, vacuum, PLC, beam instrumentation, collimation, beam optics, command controls...  The LEBT successfully reached its design goal: a residual pressure under operation of 10-8 mbar (to limit ion charge exchange through the beam pipe), a beam transmission efficiency of ~90% and beam emittances lower than the max accelerator specification (<0.4 pi.mm.mrad).

The LEBT was dismounted in June 2014 and sent to GANIL for its final installation in the accelerator tunnel. The first LEBT beam is expected in early 2015. 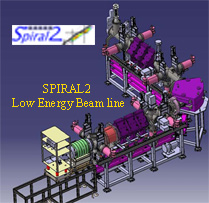 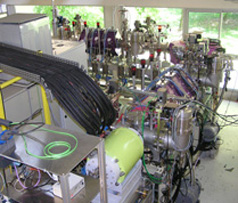