The energy spectrum of the highest-energy particles in the Universe, ultra-high energy cosmic rays, has been measured with the Pierre Auger Observatory with an unprecedented precision. In addition to the well-known kink in the energy spectrum, typically referred to as the ankle, a new spectral break is found at somewhat higher energy. This new break in the energy spectrum can be explained by an energy-dependent mass composition of cosmic rays. The results are published in two related papers (Phys. Rev. Lett. 125, 121106 (2020) and Phys. Rev. D 102, 062005 (2020)). This determination of the energy spectrum is unique in having an unprecedented exposure of more than 60,000 km2 sr yr, in its method of determining the spectrum free of assumptions about the mass composition of the initial cosmic ray particle, and about details of the hadronic physics of air showers.

Ultra-high energy cosmic rays (UHECRs) are particles that reach energies of up to 1020 eV, the highest energies of individual particles known in the Universe. With our currently available technology, the LHC accelerator would have to be scaled to the size of the orbit of the planet Mercury to reach this energy. The flux of these particles is extremely small. Less than one particle per century arrives on an area of a square-kilometer. There is a long-standing quest to identify the sources of these particles and the processes that give them such exceptional energies.

The Pierre Auger Collaboration, a group of about 400 scientists from 17 countries from all over the world, is operating the world’s largest observatory for cosmic rays: a hybrid detector made of more than 1600 surface water-Cherenkov stations covering a 3,000 km2 area, which is overlooked by 27 fluorescence telescopes. Together, the different instruments provide calorimetric measurements of the energies of particle cascades produced by UHECRs in the atmosphere and an indirect evaluation of the mass of the primary particle. Combining the information on the energy spectrum, mass composition and the observed arrival direction distribution, important constraints on the sources of these extraordinary particles can be derived.

Analyzing the data collected by the Pierre Auger Observatory so far, the energy spectrum of UHECRs has been determined with very high statistics. Thanks to the unprecedented precision of the measurement, a new spectral feature, a break in the power law at about 1.3´1019 eV, has been identified. The results are reported in two recent publications (Phys. Rev. Lett. 125, 121106 (2020) and Phys. Rev. D 102, 062005 (2020)) of the Pierre Auger Collaboration and are illustrated in Figure 1, which shows a possible interpretation of the observed flux and composition data of UHECRs in a scenario with sources that inject particles with a mass composition that changes with energy. The shown example represents a particular class of models, in which the acceleration of particles depends only on their rigidity (energy divided by charge). The abundance of nuclear elements appears to be dominated by intermediate-mass nuclei that are released from the sources with a very hard energy spectrum, which is modified by extragalactic propagation effects. In such a model scenario, the new feature in the spectrum would naturally occur due to the change of composition in the energy range of the new spectral break.

The observed energy spectrum also determines the energy density injected as UHECRs by continuously emitting sources into extragalactic space. Interestingly, some classes of Active Galactic Nuclei and Starburst Galaxies, for which indications of anisotropy have been obtained in different analyses of the Pierre Auger Collaboration, are expected to provide this energy production rate: an intriguing step forward in the quest for the UHECR sources.

The Pierre Auger Observatory is currently undergoing a large-scale upgrade by adding scintillation detectors and radio antennas on top of the existing water-Cherenkov detector stations. This will allow the scientists to obtain more information about the UHECR mass composition, extending it to the highest energies where a possible presence of light mass nuclei could open a new window to composition-sensitive searches for sources and studies of cosmic magnetic fields. 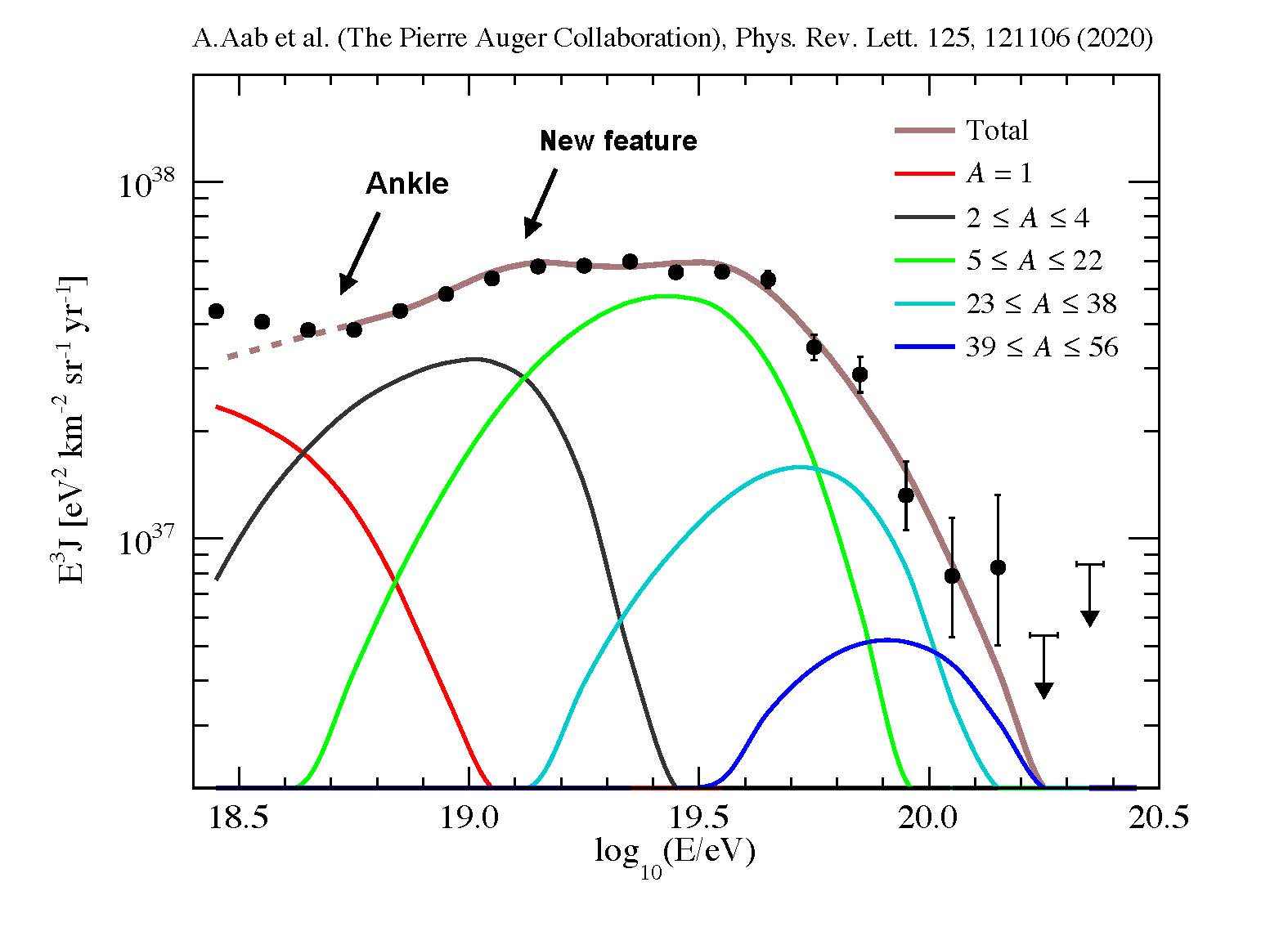