The  GANIL accelerators produce a range of beams for nuclear structure experiments.

The LISE spectrometer is used to select secondary beams of very exotic nuclei created by fragmentation reactions. The LPSC group have been involved in several isomer-decay experiments at this spectrometer, including studies of the structure of nuclei close to 78Ni and of 43S, as part of international collaborations. The latter is especially interesting as one can observe coexisting quasi-spherical and deformed states in this nucleus. A measurement of the g factor of this nucleus has shown unambiguously the collapse of the N=28 shell closure.

A new accelerator, SPIRAL-2, is being constructed at GANIL. The nuclear-structure group of the LPSC is playing an active role in preparing for the arrival of this new facility by measuring production cross-sections and collaborating on Letters of Intent for future experiments, including the DESIR facility.

Nuclear Physics at the ILL: Spectroscopy of microsecond isomers with the Lohengrin fission-product spectrometer

The region around the doubly magic nucleus 132Sn (Z=50, N=82) is one of only two neutron-rich, heavy, doubly magic regions currently experimentally accessible, the other being 78Ni. The nuclei here are particularly suitable for testing shell-model predictions as they have a simple structure, just a few particles or holes outside a closed core. As the nucleus 132Sn has a high ratio of neutrons to protons, N/Z=1.64, then it is of great interest to study the nuclei of this region as theoretical predictions concerning the properties of the nuclei here differ. Open questions remain regarding the behaviour of nucleon-nucleon interactions when a large excess of neutrons is present. These nuclei are situated far from the stability line and are difficult to produce and study. At the Lohengrin spectrometer we have studied many isomeric states in the region around 132Sn. These studies have given access to intermediate spin states in these nuclei. Our measurements can be compared to state-of-the-art shell model calculations and we can see that the predictions of these models work well for nuclei with proton particles outside 132Sn, even for very neutron-rich nuclei, such as 136Sb. The calculations do not work quite as well for In and Cd hole-hole nuclei, with respected to 132Sn, when one goes more than a few holes from this closed core.

A rapid change in shape from a spherical to a deformed one occurs for the ground state of nuclei in the neutron-rich mass 100 region when going from 58 to 60 neutrons. It is worth noting that the shape of the whole nucleus changes due to the addition of these two neutrons. The nuclei of this region have also been studied in detail using the Lohengrin spectrometer including the first observation of excited states in  nuclei such as 95Kr and 96Rb. With the aid of spontaneous fission studies using large arrays of Ge detectors, our collaboration (LPSC, ILL, Warsaw) has proposed a phenomenological explanation for these shape changes in terms of deformation driving (1/2[550], 3/2[541]) and resisting (9/2[404]) neutron Nilsson orbitals (orbitals in a deformed potential). Open questions still remain regarding the role played by the protons in such shape changes and are the subject of current investigations.

The exact nature of octupole correlations in the neutron-rich mass 150 region, and how they evolve with increasing quadrupole deformation, is also unclear. New isomeric states have been observed in 154Nd and 155Sm and the spins of several other known isomers determined. Our isomeric data have also been combined with information from spontaneous-fission measurements using Euroball or Gammasphere to produce a more complete picture of these nuclei. These studies show that octupole correlations disappear rather rapidly with increase neutron and proton numbers.

The fission, spallation and fragmentation reactions are able to produce these very exotic nuclei. The Lohengrin mass spectrometer uses the former reaction to produce nuclei in the above regions and is one of only a handful of instruments worldwide giving access to these nuclei. The short flight time (~2 microseconds) of fission products through the spectrometer means that if a microsecond isomer exists in the nucleus of interest, then its excited states can be studied. Being able to correlate the arrival of a mass separated nucleus with a detected gamma or conversion-electron decay in a short time window (a few microseconds) is a very sensitive technique, allowing the study of very weakly produced nuclei (a few per minute). 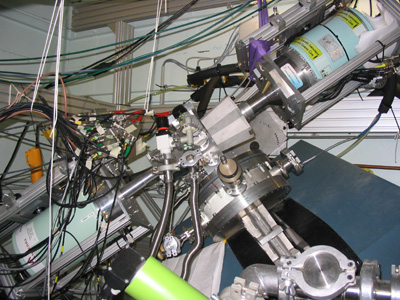 Fission reactions are produced at Lohengrin via neutron-capture reactions on different thin actinide targets which are placed close to the core of the reactor, in a flux of 5x1014 n/s/cm2. At the focal point of the spectrometer the ions are identified by ionisation chambers which are made at the LPSC. These chambers are usually optimised for the type of experiment being performed (gamma-ray spectroscopy, conversion-electron spectroscopy, lifetime measurements). Gamma rays emitted by isomeric states are detected by Clover germanium detectors, purchased as part of the ILL's Millennium program upgrade. As the energy spread of the ions at the Lohengrin focal point is small (~1 MeV) then we can stop the fission fragments at a precise distance from the end of a thin (6 micron) Mylar foil. A segmented, liquid-nitrogen cooled Si(Li) detector is placed behind this foil and as any conversion electrons emitted by the isomeric cascades lose little energy passing through the foil then we can perform conversion-electron spectroscopy down to very low energies (~10 keV). These low-energy, isomer-decay experiments of fission fragments are uniquely possible at Lohengrin. With this setup we have studied the structure of some 60 neutron-rich nuclei!

The ISOLDE on-line isotope separator at CERN provides a wide range of radioactive ion beams. These nuclei are created by using the 1.4-GeV proton beam from the CERN PSB which hits a thick target (often UCx) producing fission and spallation reactions. The LPSC group have been involved in a range of nuclear structure experiments at ISOLDE over many years, including Miniball, NICOLE and fast-timing experiments.

The nuclear structure group actively uses and/or develops various theoretical models to describe the structure of the atomic nucleus.
These include

In collaboration with the nuclear structure group from the Technical University of Ostrava, Czech Republic we are using the Quasi-Particle Phonon Model (QPM) (V. G. Soloviev, Theory of Complex nuclei (Pergamon Press, Oxford 1976)) and the Generalized Intermediate Coupling Model (GICM) (P.Alexa, J. Kvasil, N. Viet Minh and R. K. Sheline, Phys. Rev. C 55, 179 (1997)) to describe the properties of nuclei in the neutron-rich mass 150 region, where octupole modes are present. It is not clear how octupole modes evolve as a function of nucleon number and deformation in this region. By comparing recently obtained experimental data to the model predictions we can better understand the evolution of these modes and the key roles played by some orbits. Moreover, a theoretical description of the octupole correlations requires application of models that include quadrupole and octupole correlations on an equal footing as done, for example in the QPM.

The GICM is a generalization of the intermediate coupling model to spherical odd-odd nuclei. Nuclei are assumed to consist of a vibrating even-even core and two outer nucleons (odd proton and odd neutron). Compared to the other models (e.g. shell model) the GICM provides in some cases, especially for the low-energy region (but in some cases also for the intermediate-energy region where vibrational admixtures may be important) a better description of the experimental data.

Developments and applications of an algebraic version of Bohr's collective model (BM) called the algebraic collective model (ACM) (D. J. Rowe, T. A. Welsh and M. A. Caprio, Phys. Rev. C 79, 054305 (2009)) have shown that fully converged calculations can be performed for a large range of Hamiltonians. This way the rich algebraic structure of the BM can be used very effectively in analyzing a wide range of experimental data. Moreover, the BM possesses several solvable limits characterized by a dynamical symmetry and the respective submodels naturally remain solvable also in it's algebraic version ACM. Another model that is expressed in algebraic terms and thus can be used effectively and quickly to describe the nuclear structure is the interacting boson model (IBM). Similarly to the BM, exactly solvable dynamical symmetry limits can be defined that contract to those of the BM. The ACM combines the advantages of both the BM and the IBM and it is thus of interest to investigate the relationship between the ACM and the IBM models because one can learn from the complementary perspectives they afford ( D. J. Rowe and G. Thiamova, Nuclear Physics A 760, 59 (2005) . We are also investigating relationship between the IBM and the ACM in its beta-rigid triaxial limit (G. Thiamova, D. J. Rowe and M.A. Caprio, accepted in NPA), an approximation applicable to well-deformed nuclei. The full ACM Hamiltonian can be adapted to the description of even-even nuclei with any equilibrium value of the beta deformation and any degree of rigidity.

The quasi-particle-rotor model has been used by our group to interpret experimental data on deformed odd-A and odd-odd nuclei. The code, written by P. Semmes and I. Ragnarsson, even allows triaxal nuclei to be correctly described.

Thanks to the powerful computing facilities at the LPSC we are able to perform large-scale shell-model calculations using the codes Antoine, NuShellX, NuShellX-MSU and the Oslo codes. The machines at the LPSC have up to 64 Gb of RAM. We use state-of-the-art shell-model interactions developed either by the Napoli group, or included in the NuShellX-MSU package, and compare them to the experimental data obtained by our group. The shell-model calculations are used to interpret level schemes, transition rates and magnetic moments close to double shell closures. We are especially interested in the neutron-rich nuclei close to 132Sn and 78Ni as it is not clear how the nucleon-nucleon interaction evolves in very neutron-rich regions.